pfSense® software is a free, open source customized distribution of FreeBSD specifically tailored for use as a firewall and router that is entirely managed via web interface. In addition to being a powerful, flexible firewalling and routing platform, it includes a long list of related features and a package system allowing further expandability without adding bloat and potential security vulnerabilities to the base distribution. 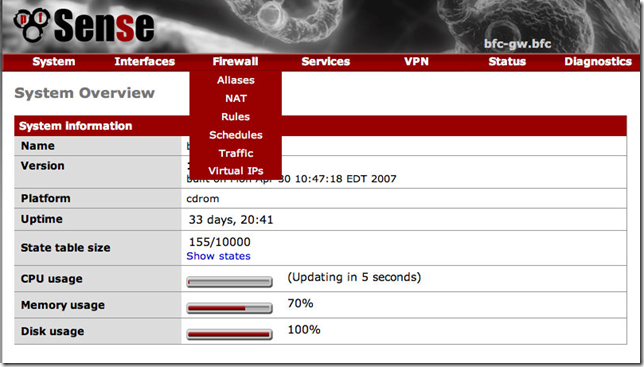 The firewall’s state table maintains information on your open network connections. The pfSense software is a stateful firewall, by default all rules are stateful.

Most firewalls lack the ability to finely control your state table. The pfSense software has numerous features allowing granular control of your state table, thanks to the abilities of FreeBSD’s ported version of pf.

The firewall’s state table is replicated to all failover configured firewalls. This means your existing connections will be maintained in the case of failure, which is important to prevent network disruptions.

Multi-WAN functionality enables the use of multiple Internet connections, with load balancing and/or failover, for improved Internet availability and bandwidth usage distribution.

Server load balancing is used to distribute load between multiple servers. This is commonly used with web servers, mail servers, and others. Servers that fail to respond to ping requests or TCP port connections are removed from the pool.

IPsec allows connectivity with any device supporting standard IPsec. This is most commonly used for site to site connectivity to other pfSense installations and most all other firewall solutions (Cisco, Juniper, etc.). It can also be used for mobile client connectivity.

The pfSense software offers a PPPoE server. A local user database can be used for authentication, and RADIUS authentication with optional accounting is also supported.

The RRD graphs in the pfSense software maintain historical information on the following.

A Dynamic DNS client is included to allow you to register your public IP with a number of dynamic DNS service providers.

A client is also available for RFC 2136 dynamic DNS updates, for use with DNS servers like BIND which support this means of updating.

Captive portal allows you to force authentication, or redirection to a click through page for network access. This is commonly used on hot spot networks, but is also widely used in corporate networks for an additional layer of security on wireless or Internet access. For more information on captive portal technology in general. The following is a list of features in the pfSense Captive Portal:

The pfSense software includes both DHCP Server and Relay functionality

And More… pls go to www.pfsense.org and get more