Hard disk is a part that must be installed when using a computer, these days, hard disks generally come in two form factors: 2.5-inch and 3.5-inch. By the way, the form factor of hard disks denotes the diameter of the disk platter inside the hard disks. 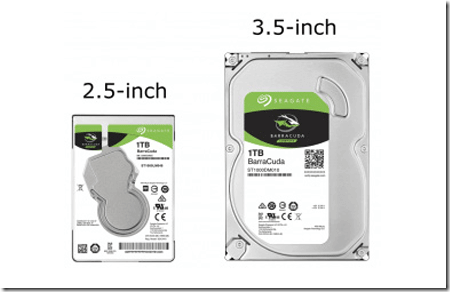 2.5-inch Hard Drives:
2.75 in × 0.197–0.75 in × 3.945 in (69.85 mm × 5–19 mm × 100 mm) = 34.925–132.715 cm3. This smaller form factor was introduced by PrairieTek in 1988; there is no corresponding FDD. The 2.5-inch drive format is standardized in the EIA/ECA-720 co-published as SFF-8201; when used with specific connectors, more detailed specifications are SFF-8212 for the 50-pin (ATA laptop) connector, SFF-8223 with the SATA, or SAS connector and SFF-8222 with the SCA-2 connector.
It came to be widely used for HDDs in mobile devices (laptops, music players, etc.) and for solid-state drives (SSDs), by 2008 replacing some 3.5 inch enterprise-class drives. It is also used in the PlayStation 3 and Xbox 360 video game consoles.
Drives 9.5 mm high became an unofficial standard for all except the largest-capacity laptop drives (usually having two platters inside); 12.5 mm-high drives, typically with three platters, are used for maximum capacity, but will not fit most laptop computers. Enterprise-class drives can have a height up to 15 mm. Seagate released a 7 mm drive aimed at entry level laptops and high end netbooks in December 2009. Western Digital released on April 23, 2013 a hard drive 5 mm in height specifically aimed at Ultrabooks.

This is the most obvious difference between the 2.5-inch HDDs and the 3.5-inch HDDs, with their form factor being used as their identity.

The difference in size between the 2.5-inch HDD and the 3.5-inch HDD makes them more useful for one application of the hard disk or the other.

In general, 2.5-inch HDDs are used in Laptops, obviously because of the space constraints of Laptops and the smaller, more compact size of the 2.5-inch HDD.

The 3.5-inch HDDs are used in Desktops and Servers comfortably and without much hassle.

However, this does not mean that 2.5-inch HDDs cannot be installed in Desktops. Since they are smaller in dimensions than the 3.5-inch HDDs what you require is an inexpensive adapter available from the market, which allows the 2.5-inch HDD to be “converted” so that its interface is like that of a 3.5-inch HDD.

Basically a 2.5 inch HDD can be operated via USB port connection with your PC. A 3.5 inch HDD requires a separate power connection to the wall.

The Hard disks are equipped with cache in order to make the data transfer in and out of the hard disk much more efficient and allowing for low data access time.

The HDD cache is also known as disk buffer. 3.5″ HDD generally have a higher cache size as compared to 2.5″ HDD for the same price tag.

RPM stands for Revolutions Per Minute and is a measure of the speed of rotation of the disks inside the HDDs.You can also call it the spin speed of the disks.

The HDDs generally use standard spin speeds of 5400 RPM and 7200RPM. The higher the RPM, the faster would be the performance of the hard disk to put it bluntly.

The data transfer speed is measured in Mega Bits/second or MB/s.This is a measure of how fast the data can be read from the HDD or written to the HDD.

The 3.5-inch HDDs can achieve greater data transfer speeds than the 2.5-inch HDDs. One reason is that the 3.5-inch HDD can hold more sectors per track on the disk platter.

So, if the spin speed is the same, 3.5-inch HDD can read more sectors than 2.5-inch HDD and hence transfer more data.

The 2.5-inch HDDs are more expensive as compared to the 3.5-inch HDDs. By virtue of the greater physical dimensions, less concern of power consumption and easier manufacturing of the 3.5-inch HDDs, the are available at much cheaper rates.

Alternatively, a tighter and smaller construction of the 2.5-inch HDD as well as aiming for lower power consumption makes its design more expensive.

The shock resistance of the HDDs is measured in ‘G’s in relation to the earths gravitational pull as being denoted as G or 1G. 3.5-inch HDDs are less shock resistant than the 2.5-inch HDDs.

The 2.5-inch HDDs may also be equipped with accelerometers which can detect that the HDD is dropped and immediately cause the HDD to park its heads to minimize the damage from shock. 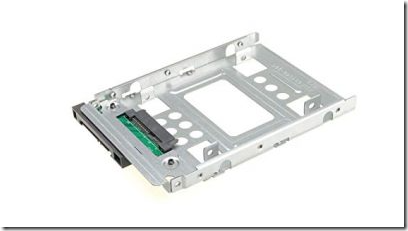 The final important difference to note as a consumer is that while 2.5 inch HDD can be used on a 3.5″ chassis using adapters, the same cannot be done with a 3.5 inch HDD.