Solid state drives (SSDs) released in recent years have become faster and more capable of handling large amounts of data. Their full capabilities, however, are being hindered or limited by the interfaces they are connected to. Serial ATA 3rd generation interfaces, designed for the much slower mechanical hard disk drives, run with a maximum native transfer rate of 6 Gb/s.

The Mini-SATA (mSATA) interface, though designed specifically to provide the smallest form factor for SSDs, is limited by the SATA 6 Gb/s link. The M.2 standard, a specification for internally mounted computer add-in cards, was created to address the limitations of mSATA and provide more options for small form factor cards, including SSDs in different sizes and with different capacities. M.2 was originally called the Next Generation Form Factor (NGFF), and then formally renamed to M.2 in 2013. M.2 improves on the mSATA standard, which uses the PCI Express® Mini Card physical card layout and connectors. As mSATA’s “successor,” M.2 provides higher performance and capacity while minimizing module footprint.

An M.2 SSD module is connected to a host either through a SATA interface or via a PCI Express (PCIe) lane. Though M.2 supports both SATA and PCIe, an M.2 module may only be inserted in either one of the two interfaces, so check your motherboard documentation to make sure that your module fits and works with the corresponding socket on the motherboard.

Differences Between an M.2 and mSATA SSD

Both are high-performance SSDs designed for small devices such as laptops and tablets. The mSATA interface used to provide the smallest form factor for SSDs. However, it is limited by the SATA 3.0 link speed of 6 Gb/s and 1 TB maximum capacity. The M.2 form factor was borne out of the need for multiple options for small form factor cards, including SSDs in different sizes and with different capacities, and possibilities for extending capacities even further. M.2 provides higher performance while minimizing module footprint. M.2 SSDs come in longer modules and with double-sided component population, enabling larger storage capacities within minimal spaces. It requires no power or data cables, making installation complete without the need for cable management.

M.2 SSDs support both SATA and PCIe interfaces. The SATA revision 3.2 specification, in its gold revision as of August 2013, standardizes the SATA version of M.2 as a new format for storage devices and specifies its hardware layout. For the PCIe version, details are included in the PCI-SIG M.2 Specification Rev. 1.1.

Physically, they look different and cannot be plugged into the same sockets. The pictures below show M.2 and mSATA SSDs. 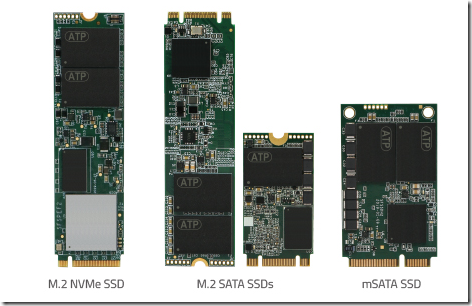 SATA remains one of the most widely used interfaces in industrial and enterprise applications, so M.2 SATA modules are optimal choices for those who want compatibility with existing systems as well as the convenience of hot-swapping and hot-plugging. M.2 modules designed for a SATA interface will perform according to the latest SATA 3rd generation standard, which is up to 6 Gb/s.

An M.2 SSD module is designed only for either a SATA or PCIe interface, not both at the same time, although some systems may have M.2 sockets that will support either one or both interfaces.

M.2 modules come in different sizes and can also be utilized for Wi-Fi, WWAN, Bluetooth, GPS, and NFC.

M.2 SSDs typically come in three dimensions, which may be deduced from the card name —2242, 2260, and 2280 — “22” represents the width in millimeters (mm), while the next two digits represent the length, also in mm. The longer the drive, the more NAND flash chips can be mounted; hence, more capacity.

In choosing the right size, one has to consider how many SSDs can be packed into a chassis, as well as thermal management issues, which may be a significant factor for sustained performance. If the area for dissipating heat is insufficient, it may result to poor performance and instability in the long run. 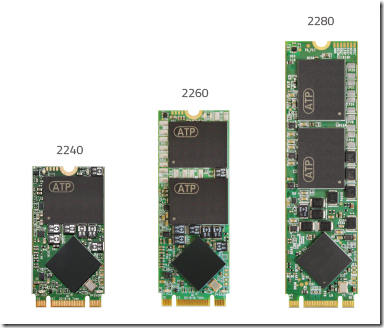 An M.2 SSD is “keyed” to prevent insertion of a card connector (male) to an incompatible socket (female) on the host. The M.2 specification identifies 12 key IDs on the module card and socket interface but M.2 SSDs typically use three common keys: B, M, and B+M. You will find the key type labeled on or near the edge connector (or gold fingers) of the SSD. Before deploying M.2 SSDs, determine the type of socket on the host and check the module connector keying, as each connector should be inserted only in the appropriate socket. 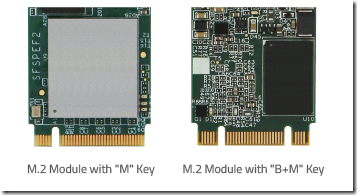